Interplay between mast cells and hormones: Part 2 of 8

Unclear role in medication tolerance and withdrawal The form of CCK most predominant in intestine (CCK-33) stabilizes mast cells.

Cortisol has a wide range of other effects Glucocorticoids inhibit mediator production in several ways.

Triggers release of annexin-1, an anti-inflammatory molecule that is also involved in the mast cell stabilizing mechanism of cromolyn.

Directly interferes with production and secretion of cytokines. The role of Annexin-A1/FPR2 system in the regulation of mast cell degranulation provoked by compound 48/80 and in the inhibitory action of nedocromil. International Immunopharmacology 2016: 32, 87-95.

Author’s note: I tried to hit the high notes here but cortisol has a massive range of effects on immune function, including mast cells, so the next post in this series will be dedicated just to cortisol and the effects on mast cells.

Fear of the dark

I was diagnosed with mast cell disease in 2012. By the time this diagnosis came, I was emotionally numb. I had been sick for years with terrifying and increasingly severe symptoms, had lost most of my hearing and repeatedly tested negative for dozens of things, rare and otherwise.

Less than a month before, a neurotologist who I will never forgive told me that I needed to see a psychiatrist because I was faking my hearing loss. I had stopped taking all my meds two weeks earlier because I was just done. I called my immunologist and told him that I no longer believed that this disease was killing me faster than the variety of risky meds I was on without a firm diagnosis.

I honestly just wanted it to be over. I didn’t want to kill myself and I didn’t want to die. But I wanted it to be over. I was sleeping through entire days, waking dripping with sweat and this acrid smell emanating from my pores, shaking and trying not to fall over when I finally got out of bed. I was in a truly unbelievable amount of pain and sleep was my only respite. I wanted to close my eyes and just…leave.

After I was diagnosed, I learned a lot about anaphylaxis and started learning about mast cells. I fixated upon anaphylaxis that occurred while sleeping with an unhealthy intensity. Despite not having serious breathing issues, I became convinced that I would stop breathing and die in my sleep. The oblivion that had been a comfort only a few months ago was now a sinister presence, watching from the dark corners of my bedroom when I turned out the lights. I would lay awake wondering if I would be aware of my death if I died, if I would stop breathing and be forever alone in some infinite darkness, until panic seized me.

A lot has happened in the years since. I have developed new, rational fears, like forgetting one of my medications while traveling (which I have since done), being labeled hysterical/unreliable by doctors, or being served food that I have explicitly stated as unsafe. Mast cell disease is unpredictable and the fact that I can’t always anticipate what will or will not make me react is a wellspring for many of my fears. The fact that something was safe the last hundred times doesn’t mean it will be this time.

Fear is important to self preservation. It is evidence of a primordial necessity of being scared. I was very scared of the dark when I was growing up, long before I knew that the dark could offer sanctuary to any number of terrible things. It is something inherited, a vestige of its utility thousands of years ago. Being fearless with a disease like mine is cavalier and dangerous. Every person, every place, every thing offers the possibility of triggering a reaction.

Fear is also a big reason why so many of us are diagnosed with anxiety or panic disorders before ultimately garnering a mast cell diagnosis. Mast cell mediators can cause a wide array of severe neuropsychiatric symptoms and our body’s response to allergic inflammation, including release of epinephrine, can bolster anxiety or panic. A psychiatrist once asked me what I was so afraid of like the things I was scared of were benign. After I told him, he responded, “Well, I guess I would be scared of those things, too.”

Fear does not ruin my life or control it. I have a complex relationship with fear. I compensate for the unpredictability of this disease by trying to anticipate all possible outcomes of a situation and building redundancies and failsafes into my personal management of this disease. I do a lot of yoga and meditate (less than I should) and walk a lot. I do visualization when I am very anxious, but to be honest, I’m still very high strung. I’m very high strung and I am about half as anxious as I used to be.

We are all of us trying to control a disease that we can’t fully control. That is upsetting and sobering and also liberating. I am getting better about doing things and going places where I can’t control things as much and trying not to compulsively explain to people who don’t know me what to do if I start shocking. I am trying to do things that scare me, like taking on additional responsibilities, taking formal classes and having recurring obligations beyond those that are essential to my life and health. Sometimes things go well and sometimes they don’t. I’m trying to be okay with that. I’m not always okay with that.

I don’t really remember what it was like before, when fear wasn’t a dark horizon in the backdrop of my life. And I’m tempted to say that I’m not scared as much anymore, but I don’t think that’s true. I’m not scared as much at this exact moment while I am writing this post. But tonight, I’ll shut off the lights, and I will still be scared of the dark.

Winter is over. That can be hard to call for sure in Boston and I’m a bit superstitious about saying things like that aloud. But I’m ready to commit to the end of winter. Spring is here.

Springtime in Boston is so pleasant and joyful that I think about it in ridiculous hyperbole. The damp dark tones of thawing earth, the stubbornly cheerful flowers, the warm wind rushing around your face in its hurry. The way the moon shines silver on breaking waves and light creeps along the horizon earlier with each passing day. Walking to work in my low yellow heels and a light sweater instead of boots and the bulk of cold weather. The cool clarity of night air through open windows.

It’s a good thing I love all these things because season changes are rough. It is one of the few aspects of mast cell disease that seems universal. We don’t react well to change and so many things change with seasons. Pollen, foods, behaviors, activities, hobbies, temperature, humidity, obligations. I wake up drenched in sour sweat, my eyes burning when I open them in the morning, already nauseous. My neck and chest are cherry red with an occasional hive for variety. I’m having some word finding issues and some obnoxious but fleeting neurologic symptoms. So yea. It’s lucky I really like spring.

It has been a rough few weeks all the way around, work, masto, MastAttack, feelings. I have never been a person who counts days or months; I mark time by seasons. Last spring, I was recovering at home from lower GI surgery after eight days in the hospital. Two springs ago, I was recovering from a several days long anaphylactic episode that landed me in the hospital for five days. Three springs ago, I was starting a new job with a brand new ostomy.

These past several months have been difficult and sad in a way I can’t really articulate. There is a weariness and a sadness and a joy and an optimism that I wield like a weapon, even when I don’t think it will help. It is a physical stability with emotional trauma and pain and regret and living with my choices. It is not terrible. It is just hard. Some days it is so, so hard.

More and more I realize that the reason I have not really found a new normal as my disease progressed is because there is no normal with this disease. There is no consistency so there can be no lasting adaptation. I no longer have expectations for what I will feel like in any moment that isn’t the one I’m currently occupying.

You don’t adapt to unpredictability. You just try not to be consumed by it.

Thank you for helping my friend, Kristina Brightbill

I am deeply grateful for all the support this community has shown for Kristina, Lucas and the rest of the Brightbill/Daly family.

I am happy to report that Kristina is a semifinalist to win the wheelchair van! In three days, Kristina got almost 4000 votes. Rare disease community for the win!

I would also to thank the many people who offered financial or logistical support, software for speech rendered by eye movement, food for Lucas, prayers, good vibes and support. I am humbled to be part of this mast cell world, even when we all drive each other crazy.

I will keep you all posted on how this contest turns out. 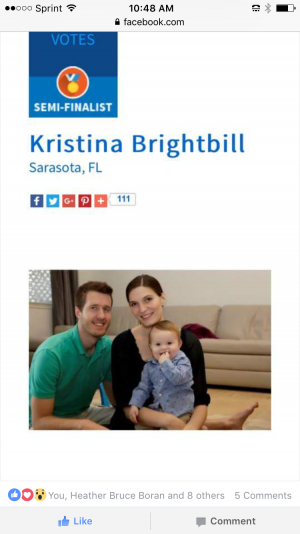 Kristina is a semifinalist!

This can occur for a few reasons. The blood disorder might increase the amount of cells that could become mast cells. The blood disorder could cause increased release and production of molecules that encourage mast cell development. Mast cells are also part of the immune response and heavily involved in tumor biology. Proliferation of another cell type can be interpreted by the body as tumor formation so more mast cells can be made to address the “tumor”, whether or not it actually is a tumor..

A patient with SM-AHNMD may have a baseline tryptase before developing the second blood disorder of 30 ng/mL. (Just making up a number here). After diagnosis with the second blood disorder, a tryptase test could reveal an increase to 35 ng/mL. However, if this were the case, we wouldn’t know if the additional tryptase is coming from mast cells made by SM ramping up or as a side effect of the other blood disorder. Because we can’t tell, it isn’t used as an indicator of increased mast cell production as a direct cause of SM.

For patients with SM-AHNMD, other markers are used to track disease progression of SM. That includes checking for things like inappropriate blood cell counts and organ swelling and dysfunction (B and C findings).