97. What is the progression of therapies to treat mast cell disease? What are the next steps if I’m not improving?

There are some general rules of thumb when adding new medications to a regimen in a mast cell patient.
• Medication changes should be done one at a time. The reason for this is simple: if you get better, or worse, it will be harder to figure out which medication is the cause. Recommendations on how far apart to space changes vary, but most recommend 3-7 days.
• Medications often contain dyes and inactive ingredients like lactose and alcohol that can cause reactions. Many patients take compounded medications to avoid these triggers. Bear in mind that compounding medications can be very expensive and many insurances will not cover it. You should also know that not all medications are able to be compounded.
• In some instances, the likely benefit of a problem medication is enough that it is worth it to try and force tolerance. This should never be done without the supervision of a provider. Premedicating before taking a dose of the medication can help curb mast cell symptoms. Personally, I will premedicate before taking a new medication for three days. If I take it on the fourth day, when I’m not premedicated, and I react, I know that I’m unlikely to ever tolerate that med. There are also desensitization protocols that involve use of IV antihistamines, steroids, and sometimes, epinephrine.
• It is my experience that often many medications that would not typically warrant a taper down before stopping must be stopped gradually in mast cell patients to prevent reactions. For example, the general population does not need to wean off IV antihistamines. They can just stop taking it without a taper. But if a mast cell patient needed six doses of IV Benadryl, and they stop the medication cold turkey the following day, they usually react. Mast cell patients should change things slowly.
• Some medications can take a while to achieve a beneficial effect. It is usually in the patient’s best interest to continue a med for long enough that they can feel confident in their assessment that a medication is or is not helping.

The following describes medication progression for overall management of mast cell disease. Please note that there are other medications that can be added for specific symptoms that are not described here. Please also note that this list is just a general guideline I find helpful.

There are also a number of other changes that may help mast cell patients.
• Remove obvious triggers.
• Consider removing or limiting some foods. This is tricky because there are at least four different lists of low histamine foods and they all conflict. Removing lots of foods at once makes it much likelier than you will lose tolerance to them. I went strictly low histamine in 2014 and it was literally years before I could tolerate even small amounts of most of the foods I removed.
• Adapt medication schedule so that triggering activities occur when medications are most available to your body. This includes things like taking antihistamines before eating or exercising.
• Supplement things that many mast cell patients are deficient in. This includes vitamin D and magnesium.
• Start quercetin.
• If possible, low impact exercise can be helpful.
• Manage your pain aggressively. Pain is a huge mast cell trigger.
• If you have a lot of environmental triggers, wearing a mast like a Vogmask is a good option.
• For patients who have severe GI involvement, bowel rest sometimes helps. Patients on bowel rest stop taking any food or drink by mouth and receive IV nutrition (TPN).
• Avoid overtly stressful situations at all costs. I cannot emphasize this enough. Do not engage in upsetting situations if at all possible.

Sent from my iPad

I love all my masto kids. But there’s something special about this little girl. The week after her second birthday, her mother, a total stranger to me, called me to convince me to be part of Addie’s team in her very complicated, very high stakes, very frightening, very literal fight for her life. I agreed. Addie was my very first case.

When our paths converged four and a half years ago, Addie was living on the edge of disaster every single day. Incidentally, so was I. We got our first PICC lines the same month. I started chemo two weeks after her mom called me. We were both in and out of the hospital with protracted anaphylaxis and scopes and procedures. We both sustained significant organ damage that year. Things were not good. But I always believed that if we could just stay alive that one day we would get better. Maybe not healthy. Maybe not well. But better. Better was the dream.

Today, we walked around Salem on a perfect breezy June day. We breathed in the salty ocean air. We looked for Halloween figurines in the small shops at Pickering Wharf. We squeezed through secret passages in dusty four hundred year old houses. We struggled to read the lettering on the smooth white faces of centuries old tombstones. We talked about school and safe foods and hospitals and ports. We ate things that would have put us in the ground when we first met.

This is not an easy life. It is never going to be easy. But there is something about looking back years later that makes you see this journey as worthwhile. We can eat food now. We aren’t admitted constantly. We are not shocking left and right. We are not always on the brink of anaphylaxis.

We are mastsisters. We are survivors. We are alive. 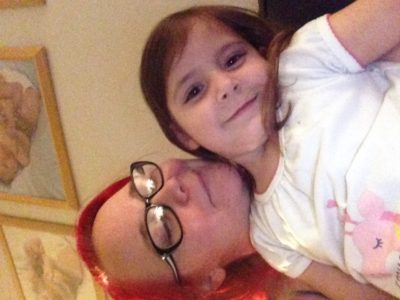 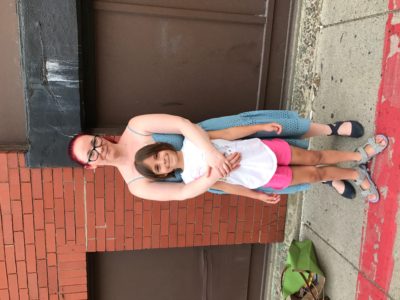