I have answered the 107 questions I have been asked most in the last four years. No jargon. No terminology. Just answers.

The difference between CD117+ and CKIT+

I received a request to clarify the difference between being CD117+ and CKIT+.

CD117 is a receptor on the outside of mast cells. It is normal and all mast cells are CD117+. This is how we identify them as mast cells. If you have a bone marrow biopsy done and it says no CD117 is found, this is not because there are no mast cells there. It is because the test for CD117 isn’t sensitive enough to find those few mast cells. This is called the limit of detection (LoD).

When there is more of something present, it is easier to find it. Say I am in a field and there are five tennis balls scattered. If I walk around for a long time, maybe I will find three tennis balls. But if there is only one tennis ball to be found, I may not find it. I have less of a chance of finding it because there aren’t as many so it’s harder.

Being CD117+ is NORMAL for mast cells. It just means that it’s a mast cell. But mast cells that are constantly activated have more CD117+ on their outside membranes. Think of it like the tennis balls – if there are five CD117 receptors on a mast cell, it’s easier for the test to find one. If there is only one, the test might miss it.

CD117 is also called the CKIT receptor. It is a receptor that gives mast cells the signal to stay alive and encourage more mast cells to mature. If you get a biopsy report back and it is CD117+, then it will say CD117. The reason the report doesn’t call it positive for CKIT is historical and has to do with the fact that it was identified first as CD117 and later called CKIT because of similarities with other proteins of similar names.

When mast cell patients say CKIT+, it is a misnomer. It means that they are positive for the D816V mutation in CKIT, which is a marker for systemic mastocytosis. So being CD117+ and CKIT+ are not the same. CD117+ just means mast cell. CKIT+ (D816V) means neoplastic mast cell.

The D816V mutation changes the shape of the CD117 (CKIT) receptor and tells the mast cell to stay alive and encourage other mast cells to mature even when it shouldn’t.

Being CD117+ does not affect medication profile for mast cell disease at all. It just means it’s a mast cell. Some drugs are approved only for CKIT- patients (negative for D816V).

If there any questions, ask in the comments.

Gene expression and the D816V mutation

What exactly is the D816V mutation and why does it matter?  To answer that, we need to understand the basic pathway by which a cell expresses a gene.

DNA (deoxyribonucleic acid) is the molecule that contains the genetic code for all known living organisms and some viruses.  DNA is composed of two strands that wrap around each other in a double helix pattern.  DNA is built out of nucleotides, molecules that contain energy.  The nucleotides that build DNA are adenine (A), guanine (G), thymine (T) and cytosine (C).  These nucleotides bond in specific pairs.  This means that when one nucleotide in on one strand of DNA, there is a specific nucleotide on the other strand.  A and T, and C and G specifically bond to each other.  They are known as base pairs.  DNA strands made up of base pairs are said to be “complementary.”

RNA (ribonucleic acid) is a more versatile nucleic acid that codes, regulates and expresses genes, amongst other things.  It also has base pairs: adenine and uracil (U), and thymine and cytosine.  These nucleotides can be complementary to DNA nucleotides.  For example, an RNA adenine is complementary to a DNA thymine, and so on.

DNA replication is the process by which an exact copy of a piece of DNA is made.  This happens when a cell divides.  In replication, the DNA double helix “unzips,” or splits apart into two strands, the base pairs of which are not connected.  Special enzymes move along each of the two split strands and place the appropriate nucleotides next to each strand to form base pairs.  The end result of this is two double helices of DNA that are exact copies. 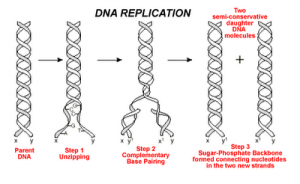 Some parts of DNA, called genes, tell the cell how to make proteins or RNA that has a specific function.  (Sometimes RNA can also do this.)  Genes tell the cell how to build and maintain the cell and allow it pass on traits to offspring.  These proteins or RNA are made by expressing the gene.  In gene expression, the information from the gene is turned into a “gene product,” that will be made into something useful for the cell.
Transcription is the start of gene expression.  Gene expression is very complicated and controlled by many mechanisms.  Having a gene does not mean it will always be expressed.  In transcription, a piece of DNA is copied into a complementary RNA strand.   This RNA is called messenger RNA (mRNA.)  This is a complicated process with several steps.  Once a gene is translated, the mRNA with the gene code goes to the ribosome, a place in the cell that makes proteins.  Proteins are made of amino acids. 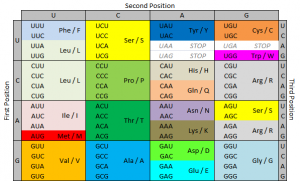 How does the ribosome know where to start?  There’s a start codon.  (And some other things also.)
How does the ribosome know where to stop?  There’s a stop codon.  (And some other things also.)
There are several types of genetic mutations, or alterations of the code from the one seen in most of the population.  In a point mutation, a single nucleotide is changed.  The D816V mutation is a point mutation.
We use a specific nomenclature to describe genetic mutations.  Amino acids are often referred to with single letter codes for the sake of brevity.  The amino acid aspartic acid is referred to as “D,” while the amino acid for valine is referred to as “V.”  In the CKIT gene, the amino acid sequence Asp-Phe-Gly (aspartic acid – phenylalanine – glycine) is very important to the receptor being shaped the right way.
Aspartic acid is encoded by the RNA code “GAU” or “GAC.”  In cells with the D816V mutation, this sequence is changed to “GUU” or “GUC.”  The second base is changed from an A to a U.  Doing this changes the amino acid encoded from aspartic acid (D) to valine (V).  These amino acids are shaped differently, and because of this, the receptor is shaped differently and behaves differently.  When the receptor is made with the amino acid aspartic acid in that place, SCF (stem cell factor) binds to the receptor and activates the cell, telling it not to die and to make more cells.  When the receptor is made with the amino acid valine in that place, the receptor activates itself and SCF is not needed.  It basically tells itself not to die and to make more cells repeatedly.
So the term “D816V” means that at codon 816, the code was altered in a way that changed the amino acid for aspartic acid to valine.  Some people with mast cell disease don’t have the D816V mutation, but often they have another mutation at codon 816, like D816G.  Sometimes they have a mutation somewhere else in the same “exon.”  An exon is the part of the code that is sent as RNA to be made into a gene product.  The location of the CKIT gene is referred to as exon 17.