The really important things require much more than that

I have two best friends named Allison and Alyson who are both very, very into music. With few exceptions, all of my musical influences arrived to my ears via one or both of them. Alyson lives in Seattle. Alli and I went to visit her there in 2014 when I had a PICC line and 40 lbs of steroid weight and a constant flirtation with anaphylaxis.

While we were visiting, the three of us went to Portland, Oregon for the weekend. It was a really amazing and cathartic experience for me. It feels like that was when I began to reclaim myself and my body and my life. It was an experience I will never forget.

Alyson has always been the type of person who follows bands around the country because she is much cooler than I am. In the last few years, she has been obsessed with Kasabian, a British rock band. She flew into Boston for less than 48 hours to see them in Boston two days after seeing them in New York and a few days before following them to Chicago.

I hadn’t really heard much Kasabian before but tonight I went to the Kasabian with Alli, Alyson and Alyson’s mom, Charlene. We were having some hairy health care moments in the line outside, waiting to get in, so I wasn’t really sure how things were going to go. But I decided that if we got into the venue that I was going to be a huge Kasabian fan for the duration of the show. It didn’t matter that I knew virtually nothing about them. I knew I loved the people I was with. I was happy to be well enough to even go to a concert. So I was a Kasabian fan. Sometimes it’s enough to just believe something, even when there’s no good or logical reason for it. Believing is enough.

We stood right up front and jumped up and down and screamed at the band. I really shouldn’t have sang along since I knew literally no words but that has never stopped me before. I jumped and bounced and screamed for two and a half hours. The energy in the crowd was amazing and the show was great.

I said to Alli tonight that I think that concert years are like dog years. I am therefore 132 concert years old. It sure as hell feels like it. I’m going to need a cane to walk tomorrow. No thigh blaster workouts necessary.

The Portland Sisterhood does Kasabian

I have a Wall of Hopeful Things in my home office space, where I do most of my MastAttack work. It is covered with things patients or parents have sent me. There is a trinket dish on my Wall of Hopeful Things that says, “It is not enough to put your heart and soul into something, the really important things require much more than that.” I think of this as the MastAttack motto. You can’t build something without leaving pieces of yourself among the blocks.

In the last few weeks, I have painstakingly mapped out the next year of my personal, professional (work) and professional (MastAttack) worlds. I have monster goals for MastAttack for the next year. I have started putting together the materials for the course videos for the spring. I have been networking a lot to work towards some other MastAttack goals. I have professional development and program goals at work. I have lots of personal things that I have forced myself to find time for. It is an intimidating amount of life I am trying to fit into these time constraints. But I decided that I could do it, and as soon as I did, I became capable of it. You have to believe it and hold your nerve. So here goes nothing.

Hope you all are having a super weekend. Be on the lookout for some MastAttack announcements this week.

It is not enough to put your heart and soul into something. The really important things require much more than that. 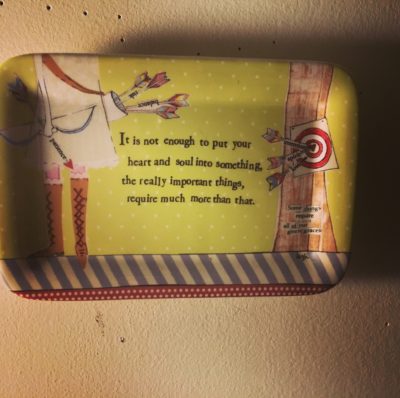 Tags:big dreamsI had this life oncei have a life againmy feelingsthe future of MastAttacktravelling
previousThe MastAttack 107: The Layperson’s Guide to Understanding Mast Cell Diseases, Part 60
nextIn which I answer all your questions: Weekly MastAttack Q&A, Week 1