I am not good at giving myself advice. If someone told me what symptoms they had and asked what the likely cause was, I could answer confidently. But when I have the same symptoms, it is hard to get past the anxiety to the answer. I am pretty much bracing myself for the worst possible scenario 100% of the time. These situations almost never play out the way they do in my head but that doesn’t stop my brain from populating my mind with ridiculous outcomes.

I basically live in constant fear of getting a line infection. The idea of the infection and not having a central line terrifies me. The port affords me a lot of autonomy and allows me to work, travel, and not be in the hospital once a week.

I can and do access my port if the need arises but I prefer not to do it myself. If there is anyone else who could possibly do it for me, I will aggressively pursue that option. But if I’m traveling, I do my accesses and dressing changes myself. Every time, my hands shake as soon as I put sterile gloves on. I don’t know why I’m so nervous or what I think is going to happen. If I miss, I can just do it again. I am a maniac about not contaminating things so if I think there’s even a chance something was contaminated, I just start over with new supplies. But I still get scared and you can’t reason with a fear like this.

I went to Ogunquit in July for a beach weekend with my sister, our cousin and some friends. I deaccessed my port to go swimming and reaccessed it later that day. Late that night, I caught my reflection in the bathroom mirror and realized my site was red. I flush on my chest most days so it can be hard to tell what exactly is happening. There were two curved red lines emanating from one spot about an inch from the site. 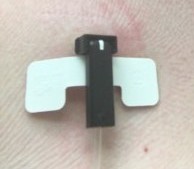 Before I could even think about it, I was panicked. It was 2am and everyone was asleep. I was an hour and a half from my hospital and I didn’t drive my car up.  I would have to wake up my sister, pack, and drive home to Boston in the middle of the night to get to my hospital. I went outside and paged the covering for my infusion nurse while I obsessed looked at the lines to see how fast they were moving. I was very sure that I had a staph infection that I got that day while accessing. Except infections don’t show that type of reaction in a few hours time.  The two bright red lines couldn’t be staph marching toward my heart because ports are tunneled lines and there were no blood vessels there for the staph follow.

The nurse called and told me that it could be the betadine reacting with the mineral content of the water or that I may not have gotten all the sunblock off my chest before accessing. She told me to mark the ends of the lines and I could deal with it in the morning provided I had no other serious symptoms. I woke up the following morning and the lines were gone.

I went to the dentist last week. The tooth next to the Danger Tooth that was removed in March has been hurting when I eat or drink certain things. It also has damage at the gumline from vomiting like the Danger Tooth did. At this point, I’m basically out of teeth that we can just remove. My wisdom and most of my molars have all been pulled. So I fully expected the dentist to give me a long involved spiel about a root canal or a crown or an implant or something.  I thought about the fact that I would have to stop drinking coke because the tooth was in bad shape. Being as I have no vices left, a can of coke is how I indulge. I was prepared for a several weeks long struggle to get my tooth repaired like it did in the spring. I was ready.

“Your teeth look great!” the dentist chirped. “They are so clean!” I have one tiny cavity at the gumline in the tooth next to the Danger Tooth. They can fill it normally. Otherwise my teeth were great.

I strutted out of that office like a triumphant man walking through town in a movie montage. I couldn’t believe it. I was so sure that the tooth would be crumbling and I would never be able to drink anything but water and so on. I was pretty convinced. Instead, it was a perfectly routine visit with a positive outcome.

When I went to Water Country, I used IM Benadryl. Every time I have to use IM Benadryl, I get nervous thinking about how sore and bruised my leg will be.  I have to talk myself into it every time because it gives me anxiety. For the first time ever, I somehow managed to inject the Benadryl in a way that did not result in a huge bruised knot. I don’t know how I did it and I’ll probably never be able to do it again.

We have skunks in Boston and they are out in full force this time of year. Before taking the dogs for a walk or letting them out in the yard, I go out and make sure there aren’t any skunks. Astoria already got sprayed earlier this summer and deskunking my dog at 2am in my mother’s backyard is not an activity I enjoy.

One night last week, I took Astoria out before bed. I had gone out before and checked for skunks before bringing her out. As I was reaching to unlatch the gate, I realized there was a skunk about a foot away from me. I turned to run away from it but Astoria was next to me and I tripped over her. I somehow managed to stay on my feet for about fifteen feet while running at full tilt before finally crashing to the ground on my concrete patio. I hit the ground pretty hard. I managed to open wounds on my left ankle, both knees, both hands, and left elbow. I have a spectacular bruise on my left hip extending down the bruise.

Falling down hurts a lot more than it did ten years ago so I just lay there for a minute. Astoria lay down next to me because she seemed to think this was a bonding exercise. In the split second when I landed on my elbow, my brain decided that I had broken my arm again. I have broken that arm before, twice. Without any evidence at all that anything was seriously wrong with the elbow, my mind had populated a dystopic future for me and my broken arm. I was pretty banged up but there were no serious injuries. I had foreseen the next six weeks of my life dealing with a broken elbow and I basically had a bad scrape that bled. Catastrophizing at its best. 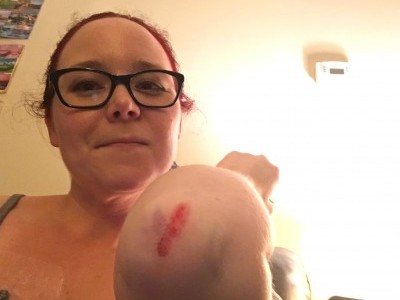 In case you are wondering, Astoria did not attack the skunk (a fact that shocks me). When I sat up, the skunk was still standing in the same spot. It had sprayed a tiny bit, so little that it didn’t hit me or Astoria. After a few seconds of staring at me, it turned around and left. I cannot believe we didn’t get sprayed.

People with serious health issues spend a lot of time assuming crash positions and bracing for the pain. We are frequently met with resistance and spend a lot of time having the same conversation with ten people who still don’t rectify the issue.  I am always afraid that today will be the day that something truly awful happens.

But it usually doesn’t. I am learning how to live here, in this space where sometimes things work out.