One of the benefits of growing up in Boston is that it offers a lot of places that make for decent field trips. A lot of America’s short history happened here. Boston kids know the pain of walking the Freedom Trail in the winter, memorizing Paul Revere’s Ride, and not being allowed to touch anything anywhere ever as we crammed into small rooms in historical buildings all over the city. Nothing on the Freedom Trail is going to hold the attention of elementary school kids for long.

The good news is that Boston does have some places that will hold the attention of elementary school kids. My favorite place for field trips was George’s Island. George’s Island is one of the Harbor islands and entirely occupied by Fort Warren, an active post from the late 1800’s until after WWII. I have lots of memories of wandering through the dark, damp rooms with a flashlight and a healthy dose of fear of the paranormal to keep things exciting. Like most old buildings, Ft. Warren has a ghost story. A Southern woman pretended to be a man to fight in the Confederate Army. She was captured and eventually hanged at Ft. Warren in a black dress, the only article of women’s clothing on the island. She haunts a narrow stone passageway that frankly would be creepy enough without a ghost.

This week, I went to George’s Island with my friend and her kids. Dana is one of the uncommon gifts that I got in exchange for the mast cell life, a great friend and mom to two masty kids. We caught the ferry at the wharf near the Aquarium and sat in the front in the sunshine. It was warmer than I expected but the wind is cool on the water. As the island came into view, an ominously thick fog rolled into the harbor.

I haven’t been to any of the harbor islands in years. The last time I was there, I think it was when I volunteered to chaperone for a summer camp group. But that’s not the memory the island has of me. It remembers me as 12 years old, on a field trip in seventh grade. It remembers the inherent awkwardness of middle school and of trying too hard to be liked. It remembers the boundless energy of youth and that I could be reckless with my body because it worked and it did the things I wanted it to. I never even considered that my body could fail me in the way it has in the intervening years.

Dana and the kids and I explored lots of dark rooms off the courtyard and walked the ramparts where the cannons used to be. The island isn’t big but the ground is uneven and inclines are steep. We followed the path all the way around the perimeter, stopping to investigate secret passages as the fog settled atop the water. We had a great time.

There is something very poignant about going back to places I visited before I got sick. It’s not just that it keeps this memory of before I grew up and before I made all these choices and before I got sick. It’s that I can’t not think about how different things would be if I could be twelve again and make all the right choices. And then maybe I wouldn’t lose all those years because dozens of doctors would rather think I’m crazy than believe that something awful was happening inside of me. Of all the things I struggle with, that is probably the hardest.

When we made it back to the visitor center, I was flushing and starting to feel less than stellar. I took meds before and took more while I was there. Nothing dangerous was happening, I just felt a reaction brewing. It was hot, humid and sunny. It was bound to happen and I was prepared for that eventuality.

We sat inside on the return ferry to get out of the sun. I waited for my meds to work as I watched the island grow smaller and smaller. Behind us, the mist closed around the island, my own personal Avalon where I will always be twelve. 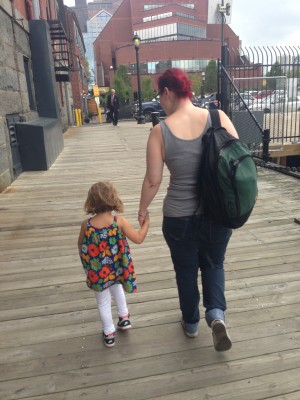