Not a sad story

About a month ago, I had finally had enough of the oppressive snow wasteland known as Boston and I booked a trip to Florida. I told my masto friend I was coming down and we chirped excitedly about plans and what to do and all of those vacation things. It is no secret that my life has been generally frustrating recently so it seemed like this would provide an appropriate escape.

We made tentative plans for everything in the way only two people with mast cell disease can and generally derped out with excitement. We went back and forth about meds and supplies and safe foods. We decided to go to Disney.

Disney is one of my favorite places and a place I haven’t really had time to explore in several years. It also has an excellent reputation for accommodating health issues (including the very complex ones) and food allergies. We figured we would spend a couple days there, but I didn’t have high expectations for how much I would be able to do. Warm weather is a welcome change given the winter Boston just survived, but I don’t do well in heat, humidity or sunlight, especially when there is a lot of physical stress (like walking or standing for long periods of time). So I pretty much just hoped for the best in the same way I always do. A bad day at Disney is better than a bad day anywhere else.

I flew out of Boston on Thursday. It went pretty smoothly, with the exception of one woman who saw me get out of the wheelchair to walk into the bathroom. When I walked to the sink to wash my hands, she said, “You should be ashamed of yourself, there are people who really need those.” My reply was blistering and ended with, “People like you are the reason people like me kill themselves.” She was stunned to say the least.

Aside from this 90 seconds of unpleasantness, everything else was great. I touched down in Orlando around 6:15 on Thursday night. My friend Nikki picked me up and we checked into our room at the Port Orleans – French Quarter at Disney. It was so pretty. I know all Disney properties are pretty, but I liked this one a lot. We went out to a really nice, allergy safe dinner at a nearby hotel.

The next morning, we medded up and headed for Epcot. I LOVE Epcot. The only thing I wanted to do there was go to all the countries in the World Showcase. We got some (allergy safe) food and made it to all the countries before it started pouring. We covered our (accessed) ports and ran for the bus back to hotel.

It was a little hairy with gummy dressings and symptoms from the sudden temperature change, but we took meds and handled it. We took a nap back at the hotel and headed over to Magic Kingdom around 8. We went on the Haunted Mansion, It’s a Small World, Space Mountain and the new Seven Dwarfs Mine Ride, saw the fireworks and caught the end of the Electric Light Parade. We got back to the room around midnight and crashed hard, but in that exhausted way where you can’t sleep.

We had originally only booked two nights at Disney because we are crazy people who overestimated our physical capabilities. I figured that if we wanted to extend, it would be possible, even if we needed to switch hotels. I didn’t realize it was the start of Florida school vacation. We had called the Disney reservation line several times on Friday and they kept telling us nothing was available. Around 3am, I figured I would search online for available rooms since I wasn’t sleeping anyway and there was a room available at French Quarter! So I booked it and then we could not have to worry about waking up early to pack and also lack of sleep is one of my worst triggers so I had been worried about that. We got really lucky and slept in before heading to Animal Kingdom in the afternoon.

I have never seen a lot of the things at Animal Kingdom before so I was really excited. We went on the safari and saw lots of savannah animals, like giraffes, lions, zebras and hippos. We had booked fast passes for some rides so we did a lot of running around. (I should probably mention here that running is not something I do or tolerate well.) We went on this Mt. Everest roller coaster which was SO MUCH FUN (side note: at this point I learned that if you have a port and are on a roller coaster going backwards, it will feel like your port is pushing through your chest wall. It was really funny, when we started going backwards, both Nikki and I put our hands on our ports at the same time). We went back to the hotel and napped for a while and then took the ferry to Downtown Disney to get some food and watch Insurgent.

I was thoroughly fried by this point, and in that super uncomfortable, muscles hurt, about to react/actually reacting, nausea/vomiting space that I really hate. I was nauseous pretty much the whole time, but it was getting worse. I slept really late the next day and met Nikki at the MGM park, which I had also never seen in its entirety. We saw the Indiana Jones show, the Great Movie ride, a really cool stunt driving show and the Star Wars ride. At this point I was feeling the liquid courage effect of Benadryl so we waited in line (in the shade) for an hour for the Aerosmith Rockin’ Roller Coaster (which is one of my all time favorite roller coasters). It did not disappoint. Then there was only a short line for the Tower of Terror so we did that, too.

So, to summarize: two mast cell patients (who have had multiple surgeries, require regular IV meds and semi-regular epi, and have complicated food restrictions) went to Disney for three days, saw all four parks and Downtown Disney, ate food they didn’t prepare themselves and through the use of naps and liberal application of medication/IV fluids, were able to see/do literally all of the things they wanted to. LIKE FUCKING BOSSES.

Now we are at Nikki’s farm outside of Ocala which is very farmy and very beautiful. It is so calm here (except when the dogs and the pigs fight because the baby pig wants them to play with her, but still). I am recovering from the visceral adventures of Disney and feeling very glad that I came.

I try very hard to depict my life as realistically as possible, the good and the bad. I am in a place in my life right now where my life is hard a lot of the time and so that is what I write about. It’s not always my reality, it’s just my reality right now.

Everyone has hard things in their lives. I don’t think that being sick is any harder than losing a parent or a difficult divorce. It’s just different, and because my particular illness is unusual and uncommon, it seems worse to people. People say things to me sometimes, about how sad it makes them that I’m so young and so sick, or that I need a colostomy, or that I have a port, or whatever. They think my life is sad or tragic. My life is neither of those things.

I think sometimes that it’s easy to get stuck on how hard things are and how upsetting it is that you will never have your old life again. But we have these bright spots, and you can choose to elevate them in your mind so that they wash out the hard things, at least for a little while.

Don’t pity me, or people like me. This is my life, and it’s not a sad story. 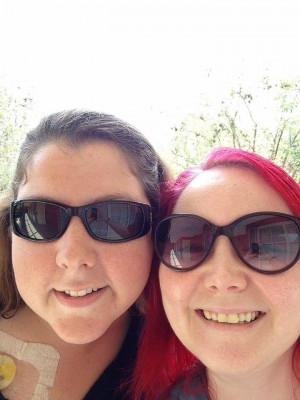