A year ago this week, I started writing regular posts about mast cell disease and chronic illness. In honor of Rare Disease Day, the last day of February, I decided to put up short posts on Facebook daily for the remaining days of February. I could not have predicted that this would eventually give way to a website that is visited thousands of times a month by people all over the world.

I wanted to write a post about having a rare disease and what it meant to be a rare patient, but I have actually been too busy dealing with my rare disease to do it. This week, it occurred to me that I actually have multiple rare diseases. Today, I learned that four of my diagnoses are classified as rare diseases in the US. I have four individual rare diseases. This is not uncommon for mast cell patients.

In the US, any disease that affects less than 200,000 at one time is considered rare. These diseases can be infectious diseases, cancers, genetic disorders, autoimmune diseases, and so on. Rare diseases are defined differently by different countries and organizations. Likewise, a disease can be rare in one region and common in another.

Almost 10% of the American population has at least one rare disease. 2/3 of Americans living with rare disease are children. Currently, only 350 rare diseases have an FDA approved treatment. This means that most of the medications we use are not designed for us and we don’t know how they will affect us.

Almost half of primary care physicians in the US say they feel uncomfortable with taking on a rare disease patient. It can take us up to six years to receive a correct diagnosis. Some people are never diagnosed.

80% of rare disease patients have one of 350 rare diseases, with the rest being significantly more rare. Mastocytosis is not one of those 350 diseases.

My name is Lisa Klimas. I am 31 years old and I live with four rare diseases.

Mast cell disease causes severe allergic reactions to things I am not actually allergic to.

All of these conditions are chronic, incurable, and painful.  Together they can cause life threatening complications.

February 28th is Rare Disease Day. For many people, it is just another day. But for me, it is a celebration.

It is a reminder that there are other people like me all over the world.

Alone, we are rare, but together we are many.  We are strong.  We are an army.

My name is Lisa Klimas and I am rare. 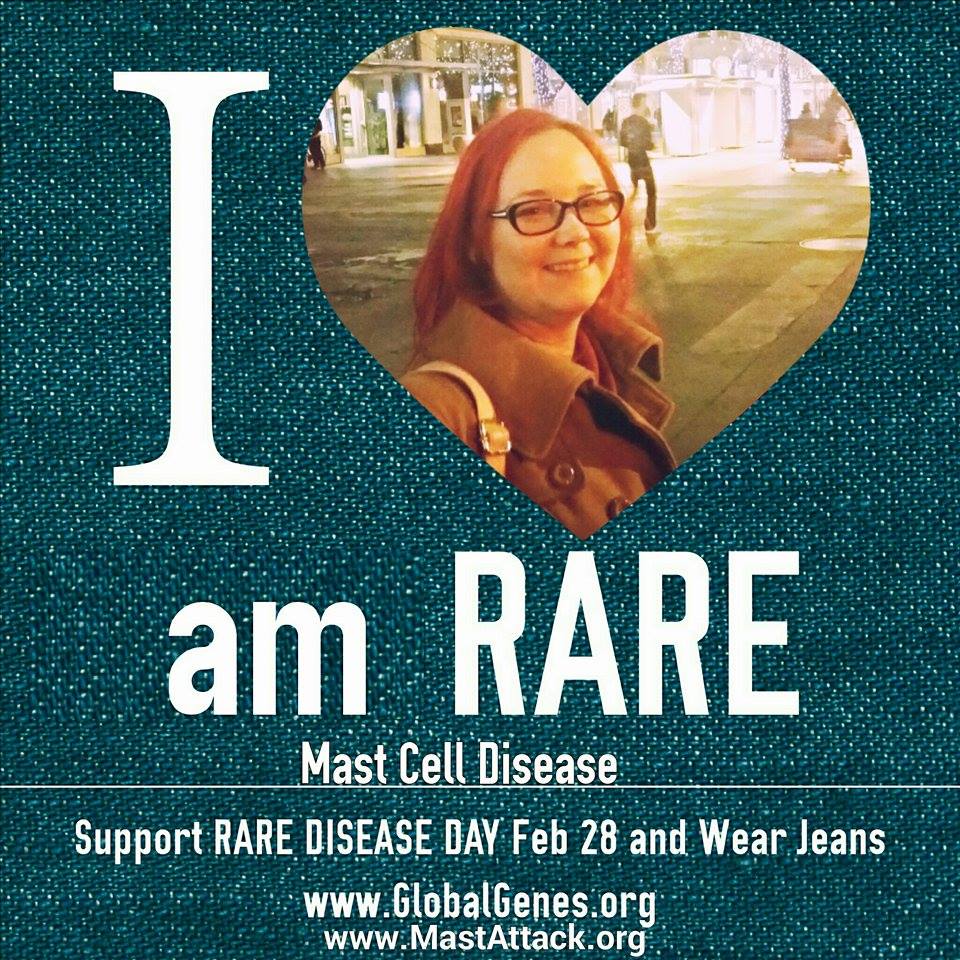 *All figures from the National Organization for Rare Disorders (NORD).

Okay, everyone. Cold and flu season is upon us, so it’s time to talk to you about immunity and disease transmission.

Herd immunity occurs when a large portion of the population is immune or less susceptible to a disease. It is mostly mediated by humoral immunity, when B cells have made antibodies and memory cells in response to an earlier infection.  Infectious diseases are transmitted from person to person, but when herd immunity is achieved, the chains of transmission are broken. This means that susceptible persons are much less likely to interact with infectious persons, thus reducing the risk of infection by those susceptible.

Practically speaking, herd immunity is achieved mostly by vaccination. The number I see most often to achieve herd immunity is 95%, meaning 95% of the population needs to be vaccinated in order to prevent widespread transmission of the disease. In reality, the requisite percentage is very specific to the disease and its natural history. For most diseases for which we vaccinate, 80-95% vaccination rate is needed to achieve herd immunity.

I’m going to tell you guys a secret now. A few months ago, someone was rolling out some unsubstantiated facts and figures on vaccination in my facebook group. I asked them to cite their source. Their response was to mock me and insist that it wasn’t worth it since I would never read them anyway. Being as I have feelings and go out of my way to be accepting even to lines of thought I do not personally endorse, I got pretty fucking mad. I don’t know what other people do when they get mad, but when I get mad, I learn everything I can about the subject in question. In this case, that included reading a vast amount of garbage and dangerous misinformation. I am talking 1-2 hours a day of reading articles and watching videos on completely inaccurate myths about vaccination.

So let me be really clear here: I read lots of posts and memes and even “scientific articles from medical doctors” supporting the anti-vaccination movement and I fervently, wholeheartedly, and without reservation of any kind, reject its merit. This information does not convey an accurate understanding of epidemiology, immunology or microbiology of infectious disease. I agree that, rarely, vaccine injury can occur. My niece had an ADEM reaction at the age of four which may or may not have been due to a vaccine (but probably not, because correlation does not equal causation.) I also agree that the risk of death or serious injury from illnesses for which we vaccinate is greater than the risk from vaccination.  I do not agree that any scientific link exists between vaccination and autism.

There is a very small portion of the population who have truly valid reasons for not vaccinating, and an even smaller portion who have truly valid reasons for completely not vaccinating. These include people with primary immunodeficiencies (for whom vaccination cannot be effective), those too young to be vaccinated, transplant recipients, and those with severe secondary immunodeficiencies (such as from medications.) Universally, these are also the people at highest risk from infection. These people cannot be vaccinated and are more likely to be killed by communicable diseases.

Mast cell patients are recommended to receive all vaccines per CDC (or relevant governmental body) guidelines. Premedicating with antihistamines is practiced by many mast cell patients prior to receiving vaccines. (Please note that steroids can interfere with vaccine action, and as such should be avoided if possible.) Simply having mast cell disease is not a contraindication to vaccination.

One of the best descriptions of how herd immunity works goes like this:

An outbreak of disease X causes infections in 101 people. 100 are vaccinated and 1 is not vaccinated.

This means the rate of infection among the vaccinated population is 0.01% and the rate among the unvaccinated is 50%, 5000x higher.

A vaccinated person can still become infected, it is just less likely. They often experience less severe disease, but not always. It is also important to get boosters at appropriate intervals to maintain strong immunity.

Seasonal flu viruses are spread by droplets dispersed by coughing, sneezing or talking. Most often, the flu is spread when these droplets contact with the mouth or nose of another person. Less often, an uninfected person may become infected by touching a surface upon which droplets still rest and then touching their mouth, nose or eyes.

If you are infected, you can start infecting others more than a full day before you have any symptoms and for up to a week after. Young children and those with weakened immune systems can be contagious for even weeks longer.

For some, the flu is just a painful and unpleasant inconvenience, with no permanent damage to their health. However, for others, it can be disabling or fatal. In the 2012-2013 flu season, 171 children died from the flu. 50% of the children had no previous risk factors for complications. 90% of the children who died were not vaccinated.

Measles is seeing a resurgence in the US, largely due to increased rates of vaccine refusal. Measles is still very common in other parts of the world. Prior to vaccination in the US, measles caused about 450 deaths a year. From 2000-2013, there were 37-220 cases annually in the US, with most being contracted by unvaccinated individuals outside of the country. This year, we have had a record 610 cases in 24 states, most as a result of 20 individual outbreaks.

Measles is unbelievably contagious. It has an R0 (pronounced “R naught”) of 12-18, which means that 12-18 other people can be infected by one person. 90% of the people close to a measles patient will contract it. An 83-94% vaccination rate is required for herd immunity against measles. It is transmitted by droplets as described above and can live on a surface for up to two hours. An infected person can infect others up to four days before they have a rash and up to four days after.

Measles is a very serious disease. It can cause a wide array of complications, including death. It can cause severe ear infections resulting in permanent deafness. Approximately 5% of children with measles get pneumonia, the most common complication resulting in death. It can also cause a fatal condition affecting the central nervous system 7-10 years after infection.

Pertussis, also known as whooping cough, has an R0 of 12-17. Almost everyone in the same house will be infected if not vaccinated. It is also spread by droplets and 92-94% herd immunity is required to be effective. A person can be contagious for up to three weeks before they have symptoms. Once the cough appears, they are most contagious, for up to 2-3 weeks after. After five days on antibiotics, a person is usually no longer contagious. A really important thing about pertussis is that the laboratory test used to detect it is not great. A negative test does NOT mean you don’t have pertussis, especially if you have been exposed.

Pertussis is especially dangerous for infants and young children, and can transmitted by holding infants too young to be vaccinated. 23% of infants under 1 year who get pertussis will develop pneumonia. 1.6% will die. People of any age can develop complications, including permanent loss of bladder control, rib fractures from severe coughing, and encephalopathy. Uncomplicated pertussis can cause severe coughing for up to 10 weeks.

I am going to California this February and I am literally terrified that I am going to get pertussis while I’m there and end up in the hospital. How unfortunate and unnecessary.

So how do you prevent getting sick and spreading illnesses?

All information on this topic is available at the CDC or WHO websites, with citations for corroborating peer reviewed literature on the applicable pages.