77. Can you have anaphylaxis with high blood pressure? 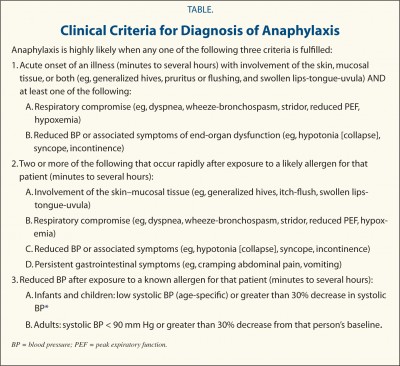 The definition of anaphylaxis
Anaphylaxis and mast cell reactions

A number of mast cell mediators are vasoconstrictors, narrowing the blood vessels and elevating blood pressure. Histamine can both increase and lower blood pressure depending on which receptor it acts upon (H1: hypotension; H2: hypertension).

Management of high blood pressure is complicated in mast cell patients by the interaction of common antihypertensives with mast cell activation. Beta blockers are contraindicated in mast cell patients because they interfere with epinephrine, both naturally produced and medicinally.  Use of beta blockers is a risk factor for fatal anaphylaxis.  Any patient on beta blockers that carries an epipen should also carry a glucagon pen, which can be administered prior to the epipen to increase efficacy.

Author’s note:  I extended this series to four posts to discuss heart failure in mast cell patients.  Following this series, I will be posting a series dedicated exclusively to Kounis Syndrome, including diagnosis and treatment.  Sit tight!

Metabolic syndrome is defined as impaired glucose tolerance (IGT) or type 2 diabetes and/or insulin resistance with two or more of the following findings:

1.       Abdominal obesity, defined as a BMI ≥30; and/or waist to hip ratio >0.90 in men and >0.85 in women
2.       Baseline blood pressure >160/90 mm Hg
3.       Increased plasma triglycerides >1.7 mmol/L; and/or low levels of HDL cholesterol (<0.9 mmol/L in men; <1.0 mmol/L in women
4.       Microalbuminuria (overnight urinary albumin excretion rate > equal to 20 ug/min.)
Inflammation is a known effector of obesity.  Microscopic examination of obese adipose tissue reveals chronic inflammation and excessive amounts of white blood cells, leukocytes.  Macrophages, white cells that are very important in the inflammatory response, are found in adipose tissue in numbers that are directly proportional to the degree of obesity.  T cells, other white cells, also accumulate in adipose tissue.
Until recently, most of the research on inflammatory cells in adipose tissue focused on macrophages and T cells.  However, we now know that mast cells congregate in larger than normal numbers in white adipose tissue in obese patients.  These patients also demonstrate a higher serum tryptase concentration than in lean individuals.  Mast cells are usually found near microvessels, very small blood vessels, in white adipose tissue.  The number of microvessels correlate with mast cell count in the tissue, implying that a relation between the microvessels and mast cells.
Mast cells release many chemicals, including TNF (tumor necrosis factor.)  TNF is known to mediate insulin resistance, and is overexpressed in white adipose tissue in obese patients.  Treatment with TNF blockers in patients with inflammatory diseases has demonstrated a significant reduction of blood insulin levels as well as the insulin/glucose index.  Several other mast cell mediators contribute to insulin resistance in fat cells, including IL-6, iNOS, MCP-1 and IL-1.
Research has shown that mast cell stabilizers, cromolyn and ketotifen, can prevent diet induced obesity and diabetes.  In mice, these medications have been able to reverse obesity and diabetes, as well as reducing body weight and glucose intolerance.  These findings have been very exciting for mast cell patients with diabetes.
It is important to know that while metabolic syndrome is usually associated with obesity, patients of normal weight may also be insulin resistant and have metabolic syndrome.
Hypertension (high blood pressure( in mast cell disease is a topic of a lot of recent debate.  In spontaneously hypertensive rats (SHR), the density of cardiac mast cells is significantly higher than normal immediately after birth.  Throughout life, cardiac mast cell density is much higher in these rats than in controls of the same age.  Mast cell chemicals TNF, NF-kB and IL-6 were overexpressed in these rats even before they became hypertensive.  In later stages of hypertension, hearts of these rats showed increased areas of fibrosis in the heart.  These areas of fibrosis were full of activated mast cells.  Expression of two mast cell chemicals, TGF-B1 and bFGF (basic fibroblast growth factor) is much higher than normal in aging and failing hearts in spontaneously hypertensive rats.
Importantly, mast cell stabilizer nedocromil was able to prevent fibrosis in SHR rats.  Tryptase levels were elevated in SHRs that were not receiving treatment, but returned to normal after treatment with nedocromil.  In untreated SHRs, levels of interferon gamma and IL-4 were elevated, while IL-6 and IL-10 were lower than normal.  All of these levels normalized after treatment with nedocromil.  This medication also prevented macrophage infiltration in the heart ventricle.  This finding indicates that mast cell signaling to macrophages is an important process in fibrosis.
Atherosclerosis is the accumulation of low density lipoprotein (LDL) cholesterol in the arterial wall.  Macrophages eat particles of LDL, and when they do, they turn into weird looking cells called foam cells.  Mast cells often live very close by foam cells, and many researchers think that mast cells help macrophages transform into foam cells.
When mast cells release chemicals, chymase and carboxypeptidase A are bound to heparin.  After release, these components form insoluble granules called remnants.  When mast cells are activated, LDL uptake by macrophages rises by 7-24X.  Treatment with cromolyn has been shown to block mast cell dependent LDL uptake by macrophages.
HDL passes from the bloodstream into the arterial wall.  When mast cells degranulate, those remnants degrade HDL components in the blood, peritoneal fluid and maybe also in atherosclerotic lesions.  Mast cell deficient mice have lower serum total cholesterol, triglycerides, phospholipids and a less atherogenic lipoprotein profile in general.
Mast cells are heavily involved in obesity, hypertension and atherosclerosis.  For this reason, many mast cell patients have these problems.