MastAttack response to the recent letter from the National Peanut Board

This post was written to directly stand against a letter recently published by the National Peanut Board (a real name that I did not make up). That letter can be viewed below and insists peanuts do not pose the risk many believe they do to allergic persons. I go through it line by line with the text from National Peanut Board prefaced with “Letter” and my thoughts prefaced with “My response.” As usual, sources are always cited. 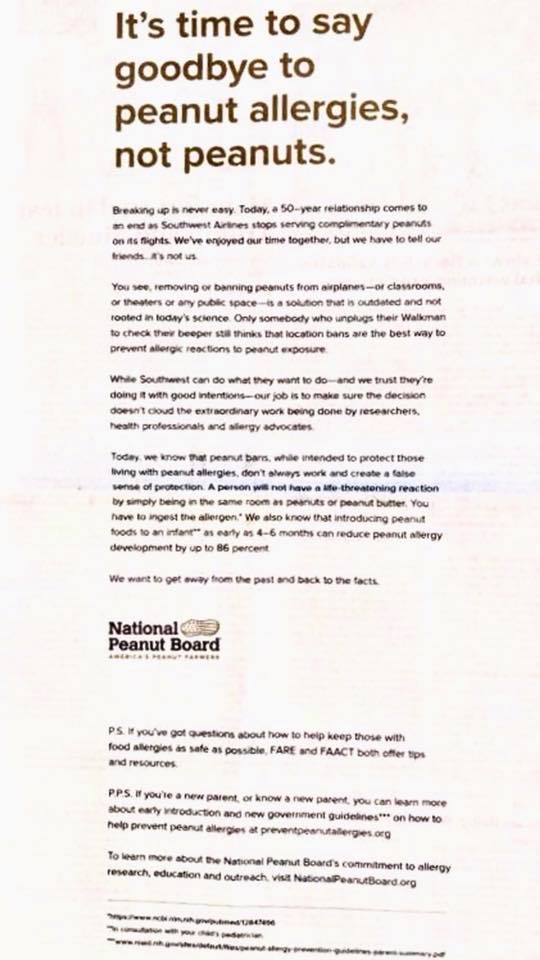 My response: Completely agree. Hooray! This guy for everything!

Letter: Breaking up is never easy. Today, a 50-year relationship comes to an end as Southwest Airlines stops serving complimentary peanuts on its flights. We’ve enjoyed our time together, but we have to tell our friends…it’s not us.

My response: Relationship drama does not belong on social media. Ten points from Slytherin.

Letter: You see, removing or banning peanuts from airplanes – or classrooms, or theaters or any public space – is a solution that is outdated and not rooted in today’s science.

My response: As a scientist, speaking on behalf of science everywhere, this is the stupidest thing I’ve ever heard. As if avoiding a potent allergen will ever be outdated. Give me a break. *rolls eyes*

Letter: Only somebody who unplugs their Walkman to check their beeper still thinks that location bans are the best way to prevent allergic reactions to peanut exposure.

My response: Secondly, location bans are one piece of a complicated system that peanut allergic people utilize to find safe spaces and keep themselves out of danger. Location bans especially make sense in venues where a person can’t just leave if they find themselves confronted by a dangerous allergen. Like, I don’t know, a metal tube hurtling through the sky at warp speed?

Letter: While Southwest can do what they want to do – and we trust they’re doing it with good intentions – our job is to make sure the decision doesn’t cloud the extraordinary work being done by researchers, health professionals and allergy advocates.

My response: The extraordinary work being done is not in any way clouded by the fact that location bans are absolutely necessary in some situations. Although given the doozy that is the next paragraph, I would venture that the “problem” is that the author of this press release fundamentally misunderstands the current research findings. Hold onto your hats! This next paragraph of this press release is going to. Blow. Your. Mind. (And not in a good way)

Letter: Today, we know that peanut bans, while intended to protect those living with peanut allergies, don’t always work and create a false sense of protection.

My response: So because they don’t prevent every instance of peanut triggered anaphylaxis, we should just not have peanut bans anymore? Come on. Even the National Peanut Board has to realize how phenomenally asinine this statement is.

My response: Let’s say you are driving in a car that has four windows. Suddenly, it begins to pour. The rear passenger side window isn’t going up for some reason. Are you not going to close the other three windows to afford yourself some protection from the rain? Because this press release says they would just never even touch a window button again because when three of the windows roll up, the driver feels a false sense of security from the rain. That is how stupid this is.

My response: Anaphylaxis at school has become increasingly common.

Letter: A person will not have a life-threatening reaction by simply being in the same room as peanuts or peanut butter. You have to ingest the allergen.

My response: The American Academy of Asthma, Allergy, and Immunology (AAAAI) and the American College of Allergy, Asthma & Immunology (ACAAI) sit on a joint task force together for the purpose of developing a robust set of medical guidelines to protect patients with allergies. AAAAI and ACAAI both acknowledge that anaphylaxis can occur without ingestion of the trigger.

My response: Other groups also reported that anaphylaxis can occur without ingestion of the trigger.

My response: Anaphylaxis to peanut can be life threatening.

Letter: We also know that introducing peanut foods to an infant as early as 4-6 months can reduce peanut allergy development by up to 86 percent.

My response: YOU GUYS, I FOUND THE ONLY TRUE STATEMENT ABOUT PEANUT ALLERGIES IN THIS ENTIRE PRESS RELEASE. But don’t get too excited because this only pertains to IgE mediated allergies, traditional allergies. There are a number of food allergies that are not mediated by IgE. If you have mast cell disease or eosinophilic GI disease or FPIES, the age when you introduce a food isn’t the driving issue in whether or not you tolerate it.