I can understand most things if you can drop it into a living system. If a body can do it, I can imagine it. But there is this thing about the inner dynamics of the human organism: that the more you study it, the less obvious causality is. There is no one way to arrive at an end point. There are dozens.

The body is clever. It is redundant. It learns. If it wants to, the body will find a way.

Mast cell disease is largely a consequence of this fact. Every patient has encountered this. If you treat a symptom with a med, it will crop back up a few months later. If you arrest mast cell production, your body finds a way to circumvent it. If you get stable at a certain dosage, you eventually need higher doses to achieve the same effect.

I think about the intricacies of my body and my diseases almost constantly. Every time my body does some new mysterious and irritating thing, I run through the various possible causes. I try to determine which pathways I have blocked and which can still be used to injure me. The body is cunning. It has many tools at its disposal that can be weaponized toward a singular goal.

But there is a flip side to this ingenuity: we are more than just our bodies.

I first met Yssabelle Eddlemon when she was airlifted to Boston from Oklahoma right before Christmas a few years ago. I had spoken with her mother both online and on the phone prior to meeting her. Yzzy and I had a lot in common. We both had major colon involvement, frequent anaphylaxis, persistent anemia, ports, an ever dwindling list of safe foods, and a short supply of treatment options not yet tried. But she also had mastocytosis in her skin, major liver involvement, and such severe airborne reactions that she mostly lived wearing a mask. And she was five years old.

She was seen by a ton of doctors, all of whom agreed she was very sick but didn’t know what to do about it. Her implanted port remained used for months after it was placed because no one wanted to be responsible for it. She was in and out of the hospital with anaphylaxis that closed her throat in seconds on a weekly basis. It was a struggle to keep her alive.

Eventually, Yzzy was able to get into a pediatric mast cell specialist in California. Things changed a lot, in a good way. Her meds were revised significantly. IV meds were prescribed to help manage anaphylaxis. The difficult decision to completely remove oral nutrition paid off.

After a few months on TPN (nutrition given completely by IV), she stabilized a lot. A scope done before starting TPN showed that she had confluent sheeting of mast cells in her colon – literally wall to wall mast cells in her colon tissue, so many that they couldn’t be counted. After a year on TPN, her colon biopsy was normal. For the first time, Yzzy was stable enough to go to school for half days while her mom stayed close by. She made friends and loved school. Her quality of life improved dramatically.

Then something happened that I did not expect: she started having these bizarre episodes of crazy high fever and hemolysis. The first few times, we thought it might be her central line so it was treated as an infection. But it kept happening and it became pretty obvious that this was not an infection. There are so many ways for the body to arrive at a sudden fever. No one could figure out the cause, including me. There were too many possibilities and not enough evidence to justify any one of them.

Patients with central lines are advised to go to the emergency department if their fever is over 100.5F. Yzzy’s fevers were sometimes over 105F. She would be brought in only to be sent home in the morning with no treatment and no explanation. She was also deteriorating in other ways. She had to stop going to school. Bizarre symptoms and bloodwork abnormalities piled up.

All said, she was brought into the ED 22 times over the span of several months before anyone figured out what was going on. Last fall, Yzzy was diagnosed with another rare blood disorder: hemophagocytic lymphohistiocytosis. Her immune system was eating her blood cells.

Things happened fast after she was diagnosed. She had suffered significant damage because HLH had been untreated for so long. They initially tried biologics and high dose steroids but the episodes continued. Then they started chemo. It was around this time that we started to grasp the eventuality of the situation. HLH can be fatal. Treatment was slowing it down but it wasn’t stopping the attacks enough to protect her life. She was going to need a transplant.

The weeks after the decision to proceed with transplant were tense and grim. She was frail and the chemo was making it worse. She lost all her hair. She swelled badly from the chemo and steroids. She had a recurring upper GI bleed. She was admitted most of the time. Managing both her systemic mastocytosis and HLH was complicated. Coordinating care across specialities was difficult and frustrating.

Yzzy had a rare stroke of good luck then, one so good that I actually cried: the search for bone marrow donors turned up three possibilities, two of them a perfect match. The transplant was scheduled for just after Christmas. She was discharged so she could spend some time at home before being admitted for several weeks for the transplant.

In early January, Yzzy underwent a brutal course of induction chemo. She developed major clotting issues and severe anemia. A second central line had been placed and was constantly problematic. She was miserable. But she made it through. And on January 12, she had the transplant.

Bone marrow transplants are dicey for the simplest patients. Yzzy is not simple. The risk for serious complications and death were significant. But it was the only option to manage her aggressive HLH. There was also a silver lining, a big one. If the transplant worked, it could cure not just the HLH, but her mast cell disease.

It is impossible to overstate how much we expected a disaster. But there wasn’t one. The transplant went perfectly. In under a week, we started seeing signs that her the transplant was making blood cells for her. In under a month, the transplant had engrafted and replaced her old bone marrow. She stopped having mast cell reactions. She was weaned off her continuous benadryl drip. She started taking oral meds instead of IV. She started trialing things for oral feeds. Her TPN infusion time was decreased. For the first time in years, she was not attached to an IV line 24 hours a day. And her HLH was long gone.

Yzzy has never known a life when her body wasn’t trying to kill her. She’s not old enough. Her body has damaged her organs, caused seizures, and repeatedly sent her into shock. For seven years, Yzzy’s body found ways to work around every treatment, every medication, every change that was made to keep her safe.

But we are more than our bodies. When her team discusses her care plan with her parents outside the door to her hospital room, she plays video games. When she isn’t strong enough to walk around, her parents drive her around to catch pokemon. When she is puking constantly, she plans the menu for a day when she can eat. This is her life and she just lives around it.

Yesterday, fifty days after her transplant, Yzzy went home. She joined a Girl Scout troop and is aggressively selling cookies online. She is making plans for her birthday party in May. She is happy to be home and reunited with her little brother. She is having Nerf gun fights. She is strong enough to run around and can laugh without risking anaphylaxis. This is the dream.

Yzzy is more than her body. And her body was no match for her. 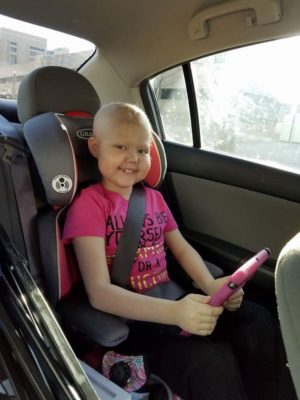