I am allergic to alcohol. I can get away with small exposures, alcohol on my skin or my port line claves, the antiseptic coolness. Ingesting it is a different story. My last sip of alcohol was the day of my cousin’s wedding before the wedding party headed to the church. Champagne bubbled in pretty flutes that we raised to toast. I took a sip, the tiniest sip, with the bride and the other bridesmaids. As soon as the champagne hit my tongue, my entire mouth went numb. I sit it out and never drank again.

I was never a big drinker. Partly because I didn’t like the taste – I was well into adulthood before I discovered how to make drinks that I enjoyed. Partly because I was so prone to hangovers. Mostly, it was because my family has a long and sordid relationship with alcohol.

Alcohol has always been part of my life. It is the buzzing undertone to a million memories. It is the cousin that gets you in trouble, that tells lies about you that everyone believes. It looks like it belongs and by the time you realize it doesn’t, it is too late. It has hooks and claws in everyone, trapping them together and pulling them apart.

I tried to cultivate a casual drinking habit when I turned 21 but I was never very good at it. Being able to experiment and broaden my palate helped. I liked novelty beers, like Wachusett Blueberry Ale. I liked pumpkin flavored beers and hard ciders. A friend of mine was a big wine drinker so I learned about wine. I liked buttery white wines, rieslings and chardonnays. Red wine made me sick. Plum wine with Japanese food was a guilty pleasure, one of the few alcoholic beverages that I still miss. I could drink beer or wine but almost never enough to get drunk.

I liked drinks made with Kahlua, White Russians and such. Vodka only if it was mixed with something strong enough to cover the scent. Dark rum for Dark and Stormies. Amaretto and Bailey’s to mix with coffee. Mixed drinks went down much easier. I could have a couple of drinks socially but I just didn’t really want to most of the time. The few times I really indulged made me horribly sick. Puking for days, GI pain and headaches for days. I didn’t know then that I was reacting to the alcohol but it made it easier to completely stop drinking.

I am five years older than my sister but the age gap feels larger because we were further apart in school. She was always a drinker. I spent a fair amount of her teenage years tracking her down and picking her up when her friends called me. I would get calls in the middle of the night from her friends who recognized that she needed help but didn’t want to get her in trouble.

If my phone rings after midnight, I get palpitations. I spent so many nights afraid that she would drink herself to death. The fear that her drinking would kill her is still so fresh.

Last year, after several particularly nightmarish months, my sister got sober. She became heavily involved in the recovery community and went to AA meetings everyday. Her sponsor started working through the twelve steps with her almost immediately.

I met her sponsor a few months after my sister got sober. She came to my little apartment on a Wednesday, an hour or so before my nurse would arrive. We talked about the recovery process and ways for family to support alcoholics in recovery. She asked if I drank and I told her no, that I was allergic to alcohol.

“She’s allergic to alcohol, too,” she said, referring to my sister. “Both of your allergies can kill you.”

Mast cell patients are familiar with the psychiatric effects of mast cell reactions. We call it masto rage but it has a real name: mixed organic brain syndrome. This condition was first described in the mid-80’s in a patient who had a psychotic break secondary to systemic mastocytosis. When I react, I get anxious, paranoid and nasty. I perseverate. All of these symptoms have been attributed to histamine release.

Mast cells are involved in a lot of things. I don’t know that I think addiction is a mast cell driven disease but I think it’s an organic illness and not a choice. Our allergies to alcohol are different sides of the same coin. My allergy is treated with benadryl and epinephrine. Hers is treated with twelve steps and searing honesty.

Last Friday, I got to watch as my mother presented my sister with her one year chip at a meeting of her AA home group. My sister has a job she enjoys and just started night school for her MBA. She is happy.

I am allergic to alcohol. So is my sister. 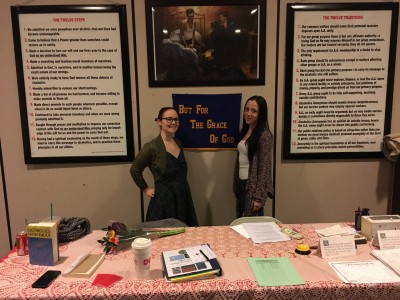