My body is my adversary. I hardly remember a time when that was not the case. Even before I got sick, I struggled to make my body do the things I wanted it to. You can only do that so much before you begin to resent these shells we live in.

I was a small child, very small. I wasn’t four feet tall until eighth grade. That year, I grew a foot, and never again. Throughout elementary school, people commented on how small I was and how little I weighed. I was limber and very nimble; together with my lack of height, these characteristics gave me the body of a gymnast. I did splits and back handsprings and aerial cartwheels in my living room and backyard. I threw tricks during recess. I weighed so little that very little strength was required.

In seventh grade, I acquired the body of a woman overnight. I took ballet classes at that point in a small brown building around the corner from my house. One day, I caught my reflexion in the wall mirrors. I was rounder, with thick legs, breasts and a forming hourglass figure. I was still short but I wasn’t small.

I lamented the loss of my tiny frame but I wasn’t overly concerned with toning or losing weight. I walked a lot and was active if not athletic. In 2000, I started getting a three month birth control injection. In the months that I followed, I gained 26 lbs. I went from being thicker to being fat.

I was very unhappy with my body throughout college and grad school. I worked more than full time and carried a full course load. I picked up better eating habits when I got an apartment but I didn’t have time to exercise.

In 2007, I woke up in the middle of the night and while walking across my living room carpet to the bathroom, I realized my ass was jiggling. It actually stunned me awake. The next morning, I signed up to walk the Breast Cancer 3-day, 60 miles in three days, largely for the fitness aspect of the event. For the next six months, I walked increasing distances 3-4 days a week and did short workouts on the other days. I didn’t change my diet at all except for not drinking coke. I lost 25 lbs and gained a lot of muscle.

The summer of 2007 stands out for me as a time when I was happy with my body. I was still bigger than I wanted to be, but I was actively losing weight and felt much stronger and more able. I went backpacking in Scandinavia and was on strenuous mountain hikes without trouble. I took up rock climbing. I completed the 3-day and continued with the training schedule. Over the next three years, I would walk four more 3-days.

In 2009, I lost most of my hearing. I ended up on high dose oral steroids for a few weeks and quickly gained 20 lbs. My face was squishy and I was swollen everywhere and nothing fit anymore. At the same time, my disease was also accelerating. I still walked and tried to make time for yoga class but I was in a lot of pain and often too exhausted to work out. I gained more weight. And more.

By 2012, I weighed about 165 lbs. I started doing advanced yoga several times a week and was able to lose 10 lbs in about nine months. The following year, I had my colostomy placed and lost 10 more lbs. I was stably 145 lbs until the end of 2013 when I started high dose steroids again along with several other meds known to cause fluid retention and weight gain. I gained 30 lbs in six weeks and then gained a little more. My abdomen was so swollen that I looked nine months pregnant. I had to wear maternity clothes to accommodate my belly.

Decreasing steroids took off some weight but I was still much bigger than I wanted to be. In 2015, I had another GI surgery. I again lost 10 lbs almost immediately. Following the surgery, I was able to do a reconditioning program before I returned to work in order to build up my stamina and physical tolerance for exercise. I was less inflamed than before the surgery and reacting less. I was able to address several smaller concerns that had been on the back burner like vitamin D levels. Together, these changes allowed me to recondition effectively. I could exercise again, making it easier to manage my fitness. (For those interested, I describe my reconditioning program here.)

Over the next 18 months, I lost another 10 lbs. I found long, flat muscles in places I never expected to see. Even as I cursed my body for having this disease, I was happier with how it looked. I had to buy new clothes because even my smallest clothes, saved from previous years, were too big.

Last fall, I started dropping weight, much faster than I should have been. At the same time, I was having fevers, night sweats, and a slew of other symptoms I have written about. I countered the weight loss by eating more but I eventually developed gastroparesis and started throwing everything up. I am now getting some of my calories through 2L of IV fluids daily. I am now getting most of my calories from “nutritional drinks”. (My homemade version is Orgain chocolate protein powder, organic maple syrup, and almond milk.) I am tolerating it but I can’t drink it fast without getting nauseous. I’m not getting much fat in my diet and my body is now showing that.

I took a picture of myself tonight. For the first time, I was unsettled by how I looked. I am getting very thin. I am the smallest I have been as an adult. I can certainly lose more weight before I’m in danger but it was seriously jarring to see myself. I am leaving “you don’t look sick” territory.

So here I am at 3am thinking of ways to gain back weight that I spent years trying to lose. A different kind of adversary. 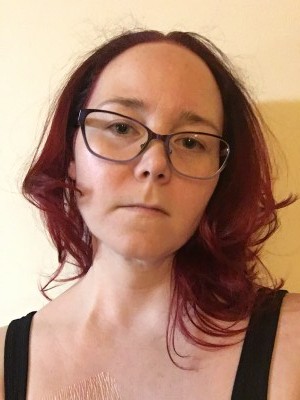 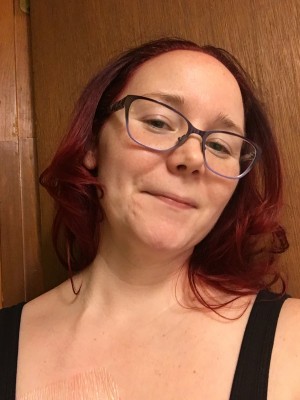