I don’t remember the first time I was amazed at what my body could do, but a few episodes come immediately to mind. In 2007, my friend and I got lost while hiking in Norway near Bergen. We lost the moderate grade trail and instead found ourselves very carefully descending rock faces and hiking for several hours longer than expected. We had adequate food and water, decent weather and the benefit of a very late sunset, but almost twelve hours of physical exertion made for a long day.

When we got back to the hostel, it took almost an hour in a hot shower to get all the dirt off. We were exhausted. I crawled into bed and slept deeply, a narcotic, dreamless rest. Just before I fell asleep, I thought to myself that I couldn’t believe that I hadn’t injured myself.

In 2009, I fell through the floor of my attic, which was the ceiling of my front porch. I grabbed a beam as I fell and pulled myself up without hesitation. As I sat on the beam, remembering the image of my legs in the hole with my porch below, I was pretty impressed that I had managed to catch myself. I hit a different beam as I fell and had lots of bumps and bruises, including a huge one right at the top of my leg. In the bathroom mirror, it looked like a black smile.  I was otherwise fine.

There are other moments. The first time I did crow pose. The day I ran a 5K. The several 3-day walks in which I walked sixty miles in three days. Actual feats of physical prowess.

I can no longer do things like that. Maybe I will again someday, but right now, it would be impossible. Still, there are moments when my body amazes me.

I walked down to the harbor yesterday. After weeks of suffocating greyness, 35°F felt like spring. The world outside was thawing, liquid, burning bright with reflected light. I didn’t care how much pain I would be in tomorrow. I just wanted to be alive in a world that was finally thawing, even for a short time.

Boston Harbor was frozen. There were no waves. The water was motionless. Large white globes of ice hung suspended, a crystalline sheen atop the surface. It was otherworldly, and really very beautiful. By the time I got home, I was in a massive amount of pain from the muscular strain of staying stable on ice and snow. I spent last night in bed on muscle relaxers with my heated blanket gathered against the small of my back.

Today the pain is worse and the world is once again encased in ice. But I am renewed in the knowledge that sometimes, my body is still capable of impossible things. I may never climb a mountain again, but in the brief reprieve from a legendary winter, my body walked to the ocean and saw the world doing impossible things, too. 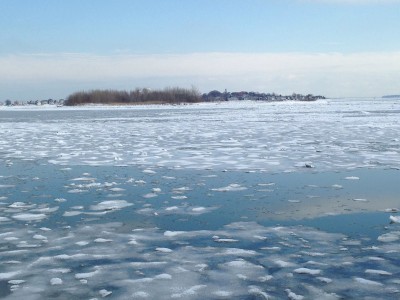